A cookie is information stored on your computer by a website you visit. Cookies often store your settings for a website, such as your preferred language or location. This allows the site to present you with information customized to fit your needs. As per the GDPR law, companies need to get your explicit approval to collect your data. Some of these cookies are ‘strictly necessary’ to provide the basic functions of the website and can not be turned off, while others if present, have the option of being turned off. Learn more about our Privacy and Cookie policies. These can be managed also from our cookie policy page.

IE10 and below are not supported.

Who is Panuku?
Why is Panuku and Auckland Transport doing this trial?
What and where are the temporary street changes exactly?
Who are the locals you are working with?
How long will the trial take to install?
How long will the trial last?
This is the first I’ve heard of it. When was the consultation?
Is Panuku and Auckland Transport taking away parking spaces in Henderson Town Centre through this project?
Will this make traffic congestion worse?
I drive through here every day. How do I get through Henderson now? Will access to my business or destination be affected during the trial?
What is the artwork about? Why is it blue?
How do I give feedback and will my feedback decide whether this trial is made permanent?
How is this funded? How did this get prioritised against other funding priorities?
What is tactical urbanism?

Why is Panuku and Auckland Transport doing this trial?

We are doing this trial because Henderson locals have asked us to make central Henderson Streets safer, more vibrant and less dominated by traffic. Rather than Panuku or Auckland Transport coming up with a full permanent design and taking years to construct and consult on it, we are working with locals to quickly trial a number of temporary changes to the streets so that we can collect real feedback and data on people’s actual experiences of the changes. If something isn’t working or locals would like something changed, we can potentially do that before making more permanent decisions. The data below comes from three months of co-design workshops and community discussion held in central Henderson from October to December of 2020.

What and where are the temporary street changes exactly?

The changes are proposed on a number of streets in Central Henderson (see map below) including parts of Great North Road, Ratanui Street, Railside Ave, Waitakere Lane and Trading Place - they include: 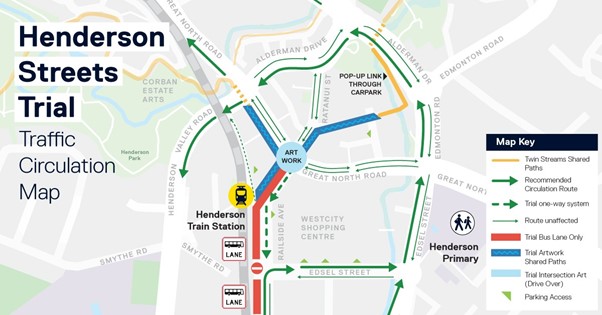 Who are the locals you are working with?

We are working with local people who know Henderson well to help guide us with the project.  These people form the local advisory group:

How long will the trial take to install?

The trial is expected to take just 3-4 weeks to install from approx 12 April 2021. In comparison, a permanent town centre upgrade can take 1-2 years of construction. This project is designed to be a quick temporary install with minimal disruption. Most of the artwork   installation will occur at night.

How long will the trial last?

The trial is planned to be in place for approx three months from April-June 2021. Towards the end of this trial a decision will be made as to the future of the trial. Some elements may be transitioned into more permanent changes if they are deemed successful.

This is the first I’ve heard of it. When was the consultation?

This trial is the detailed live consultation. You are welcome to feedback on any part of the temporary changes as you experience them. It’s important to note that the changes being proposed are also based on previous consultations undertaken in Henderson including:

Is Panuku and Auckland Transport taking away parking spaces in Henderson Town Centre through this project?

Will this make traffic congestion worse?

Traffic at peak times in Henderson is already congested and it is important to note that this project is not designed to solve traffic congestion but rather give people a choice to avoid it by:

I drive through here every day. How do I get through Henderson now? Will access to my business or destination be affected during the trial?

All access to businesses and destinations will be retained through this project- but you may have to drive a different way. These route and access changes are part of the traffic flow plan which aims to get most heavy traffic movements out of the heart of Henderson. The main direction to remember is ‘go around not through unless you need to go in’. The crossing signal in the middle of Henderson on Great North Road is changing to a ‘barnes dance crossing’. This means it allows pedestrians and cyclists to cross the intersection in all directions at once, including diagonally across the intersection. This may take you longer  if you try and drive through the centre, therefore it is recommended to find other routes around the centre. At most, it is expected that travel times going around Henderson may increase by up to 2 minutes, based on Google directional traffic data.

What is the artwork about? Why is it blue?

The roadway intersection artwork was created by West Auckland Artist Jermaine Reihana – who was appointed by Mana Whenua and Panuku.

It uses a contemporary interpretation of Tāniko, Whāriki and Tukutuku (weaving patterns), to highlight the significance of Henderson as a place where both people and the Twin Streams (Wai o Panuku and Wai Horotiu) come together to meet.  The main diamond shaped artwork is of a Waharua Kōpito pattern. This pattern is a reminder that change occurs at central meeting points and also acknowledges our past and future journeys as the top diamond point provides a directional aide by pointing to the north.

The artwork is blue because it reflects the narrative of the twin streams flowing in and around the Henderson town centre. The aramoana aronui (zig-zag) motif on the shared paths signifies movement and flow, Aramoana means pathway of the sea. The horizontal zig-zags can suggest waka pathways that the ocean and other waterways provide to many destinations. A stylised combination of aramoana and aronui. Aronui or aonui (triangle motif) refers to the pursuit of knowledge about the natural world with reference to the Waitākere Ranges.

How do I give feedback and will my feedback decide whether this trial is made permanent?

You can give feedback either online or on-site via a feedback form.

These changes are a ‘trial’ of ‘temporary changes’. You can also meet with someone on-site to discuss specific details or elements that aren’t working from your perspective. Your feedback is important in assisting the future decision-making of whether these  temporary changes become permanent, but it won’t be the only information we collect. We are also undertaking an extensive monitoring and evaluation study of the changes including measuring pedestrian counts, vehicle speeds and counts, bus reliability data, EFTPOS changes to spending data in the main street. All this information will inform decisions around the future of the changes that works for Henderson locals.

How is this funded? How did this get prioritised against other funding priorities?

This project is 90% funded by Waka Kotahi (NZ Transport Agency) as part of its Innovating Streets for People initiative https://www.nzta.govt.nz/roads-and-rail/innovating-streets/about/pilot-fund/

Panuku applied  and was successful for the 90% funding, with the remaining 10% of funds being provided by Panuku, as part of its Unlock Henderson programme https://www.panuku.co.nz/henderson.

Henderson has been identified as a priority neighbourhood by Auckland Council for both housing and transport investment as set out in the Auckland Plan 2050: https://www.aucklandcouncil.govt.nz/plans-projects-policies-reports-bylaws/our-plans-strategies/auckland-plan/development-strategy/Pages/anticipated-growth-where-when.aspx

Henderson has good public transport links which will be enhanced by the City Rail Link. Auckland Council and Panuku are facilitating nine projects in Henderson to catalyse urban regeneration, including upgrading public spaces and walking and cycling links.

What is tactical urbanism?

Tactical urbanism is a phrase used to describe the ‘trial and test’ approach we are taking in this project.

Tactical urbanism is about changing spaces like streets in cities with short-term, low-cost, scalable ideas intended to put people first, so neighbourhoods are safer and more livable.